Assembly theme – St George’s Day
St George's Day is celebrated in England on 23 April, in honour of St George, the patron saint of England. His emblem, a red cross on a white background, is the flag of England, and part of the British flag.
It is customary for the hymn “Jerusalem” to be sung in cathedrals, churches and chapels on St George’s Day, or on the Sunday closest to it.
Listen to Jerusalem being sung at the BBC Proms. How would you describe the mood of the piece? How does it make the audience feel?

Virtual Big Sing
I’m really excited to announce that the songs are beginning to be revealed for this year’s Virtual Big Sing. One of the songs is Symphony by Clean Bandit.
Here they are performing it live from the BBC Big weekend:

This is the version of Symphony we have seen before that was released last year for Comic Relief:

This is another of Clean Bandit’s songs. It combines modern electronic music with classical melodies written by Mozart who is our musician of the month:

School Values - Respect
Our School Value for this half-term is Respect.
We uphold every person as a unique and worthy individual. Each should be empowered to function and thrive in their roles, whatever those may be.

"Respect Yourself" was written by Luther Ingram and Mack Rice and first performed by the Staple Singers in 1971. This song emphasises having respect for oneself.
Here is a modern performance of it:

Ten Piece – Mozart’s Horn Concerto
This month we are listening to Mozart's Horn Concerto No. 4 (3rd movement). Here is a different performance. Last week I posted a horn player using a horn more like the ones played in Mozart’s time. This performance is on a more modern French horn. What differences can you spot?

Find out more about our Mozart and his Horn Concerto here:
https://www.drake.norfolk.sch.uk/horn-concerto-no-4-3rd-movement-by-mozart/


Assembly theme – Rama Navami
Rama Navami is a spring Hindu festival that celebrates the birthday of the Hindu God Lord Rama. The day is marked by Rama Katha recitals, or reading of Rama stories including the Hindu sacred epic Ramayana. Some Vaishnava Hindus visit a temple, others pray within their home, and some participate in kirtan which is a type of devotional song.

Every year on 22 April, Earth Day is celebrated around the world in over 192 countries. But this annual event is much more than a celebration – it’s an important day to raise awareness about looking after the environment.

If we want to keep our planet clean and safe for years to come, we need to reduce the amount of pollution we produce and fight against climate change. That’s why on Earth Day, over a billion people take part in activities to make the world a healthier place – from conferences and street marches, to art displays, concerts and beach clean-ups! 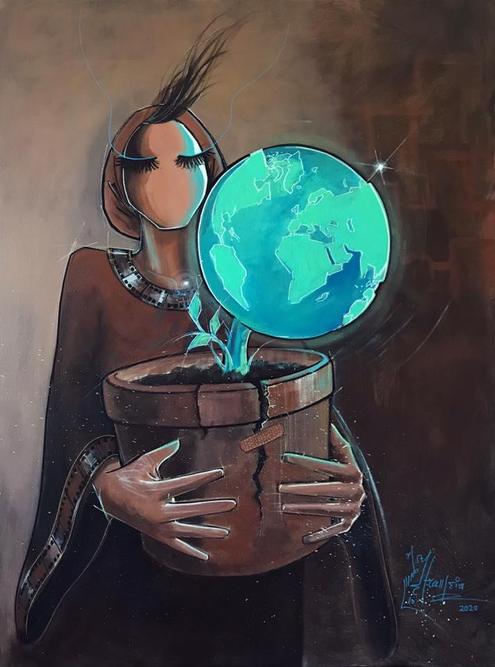 I wonder if you recognise the style of this painting that was created last year for the 50th anniversary of Earth Day.
Can you tell the artist who painted it? It is someone we have been looking at.
Here is a video of them painting it: https://www.youtube.com/watch?v=iSbwdiUMmA4

Diana Movius is a climate policy analyst in Washington D.C. She’s also a professionally trained ballet dancer and choreographer. Dance and environment have always been her two passions, ever since she was a child. For most of her life, her two identities have stayed separate. But as she watched a documentary about ice melt in the Arctic, Movius wondered if something could be translated to the stage. Movius created a ballet called “Glacier” for the contemporary dance troupe she directs. In it, dancers’ movements represent glaciers and floating sea ice as they flow, break, and melt. The choreography is paired with video footage from the Arctic.

This is an excerpt from the ballet:

Dharti Ma - A Tribute to Earth

Last year, to celebrate the 50th Anniversary of Earth Day, some of the finest musicians in India collaborated to create the song Dharti Ma. “Dharti Ma” literally translates to Mother Earth and is a tribute to our planet. The song is an amalgamation of different styles from across India and has been sung in eight languages that span the length and breadth of the country.
Bombay Jayashri Ramnath, ambassador of Earth Day Network, says, “Music heals, music is a prayer. We are going through a very challenging time. Through the notes and the melody, we wish for good health and well being for the world.”