'Dies Irae' and 'Tuba Mirum' from 'Requiem'
by Giuseppe Verdi 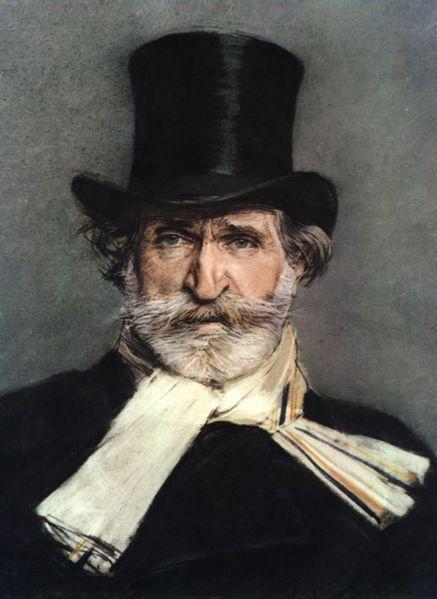 Born: 10th October 1813 (Le Roncole, Italy)
Died: 27th January 1901 (Milan, Italy)
Nationality: Italian
Key facts:
* Verdi was an Italian composer of the Romantic Period.
* Verdi was one of the greatest opera composers who ever lived, and one of the few composers to die rich and famous!

Giuseppe Verdi (or 'Joe Green' in English!) was an Italian composer during the Romantic Period. No other composer of Italian opera has managed to match the popularity of Verdi. He told epic stories in a way that immediately appealed to the public with memorable, hummable tunes and lots of drama. His work still remains extremely popular today.

Verdi first engaged with music at a very young age, when he began playing the organ at school. He was so interested in music that his parents bought him a spinet – an instrument a bit like a mini piano – and it was obvious from the outset that Verdi had a natural gift. When the principal organist died, Verdi then became the church's official paid organist – not bad going for an 8 year old! He continued to play music from this point on and at the age of 13 began to write his own pieces.

Verdi's first opera – Oberto written in 1839 – was a big success. But his second was a total flop. At this point he claimed that he would never compose again. This vow didn't last long though and in 1842 he wrote his most popular opera: Nabucco. Verdi himself claimed he “never had an hour's peace” from that day onwards – he was officially in demand! He went on to write 29 operas in total and became pretty wealthy as a result. He spent many years travelling around Europe, composing, teaching and going to star-studded premieres. His music was soon being performed all over the world and he had become a bit of a celebrity. He remained so for the rest of his life.

Dies Irae and Tuba Mirum are sections of a larger piece of religious music called Requiem. Verdi composed his Requiem in 1874 in memory of the famous poet and novelist Alessandro Manzoni. He wrote it for four solo singers, plus an enormous choir and orchestra, and it's still performed regularly today.

Dies Irae is Latin for ‘Day of Wrath’ and it tells of a person coming before God to receive judgement at the end of their mortal life. God looks back on the human's time on earth and weighs up all the good things and all the bad things that they've done. Depending on which one outweighs the other, the human is then sent to either heaven or hell. Although Verdi wrote this piece as part of the Catholic Mass service, the idea actually appears in all of the world's major religions in various different forms: the way you behave during this life will affect what happens to you during the afterlife. So, if you believe in that, then don't squash ants and always hold doors open for people! This story gives the music some context, but even without that it is still a powerful, dramatic and pretty terrifying piece which has just as much impact today as it did 100 years ago.

Listen out for: How big the piece sounds. Verdi wrote it for four solo singers, plus an enormous choir and orchestra.

Try playing along with the bass drum in Dies Irae:
https://www.youtube.com/watch?v=YjPpiyMBvfY


Romantic Period  - roughly 1810 - 1900
Verdi was composing during the Romantic period which took place in the 19th Century. During this period, the orchestra was really expanding and composers were experimenting with creating new sounds. The saxophone was invented and the percussion sections of orchestras became much bigger.
Composers from this period moved away from the formality of classical music and poured emotion, energy and passion into their pieces. They wrote music that was designed to tell a story (called programme music) and experimented with creating different moods through music.

Find out more by watching this video:
https://www.youtube.com/watch?v=-DSjjXQaF-g

Listen to a podcast about the Romantic Period and hear music by other composers from that period:
https://www.classicsforkids.com/music/musical_period.php?id=Romantic

Clara Schumann was a famous pianist and composer. While she was a very gifted composer, in those days people thought that women should not be composers, so she devoted more time to her playing.
Listen to a podcast about Clara:
https://www.classicsforkids.com/shows/shows.php?id=44

Mussorgsky
Mussorgsky is another Ten Pieces Composer from the Romantic Period who we learned about last year:
https://www.drake.norfolk.sch.uk/night-on-bare-mountain-by-mussorgsky/