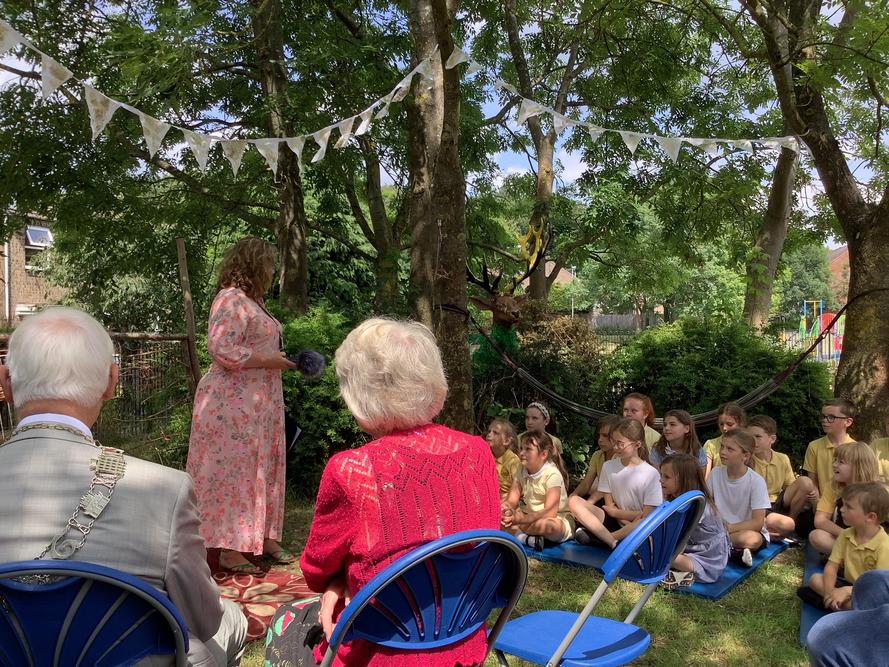 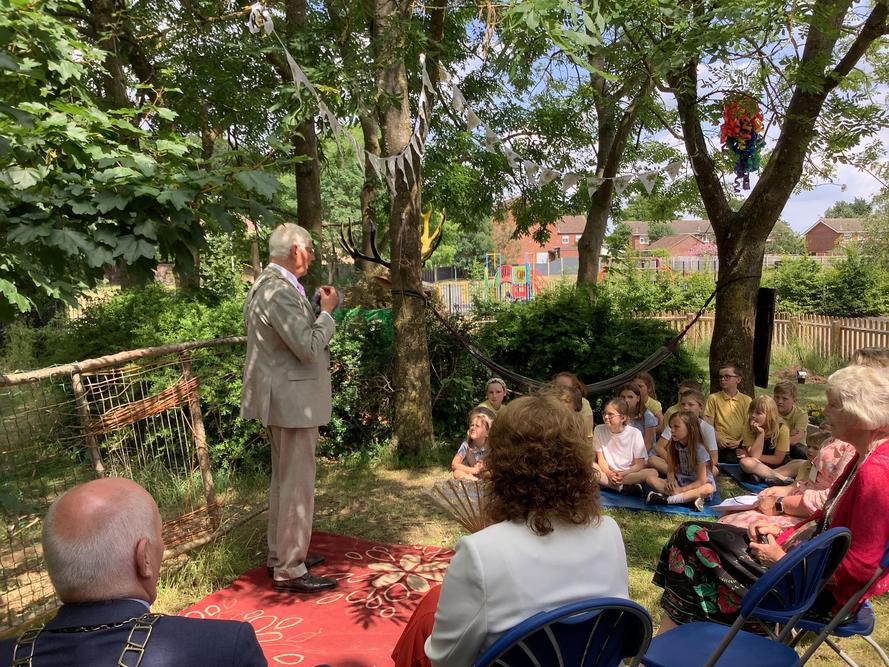 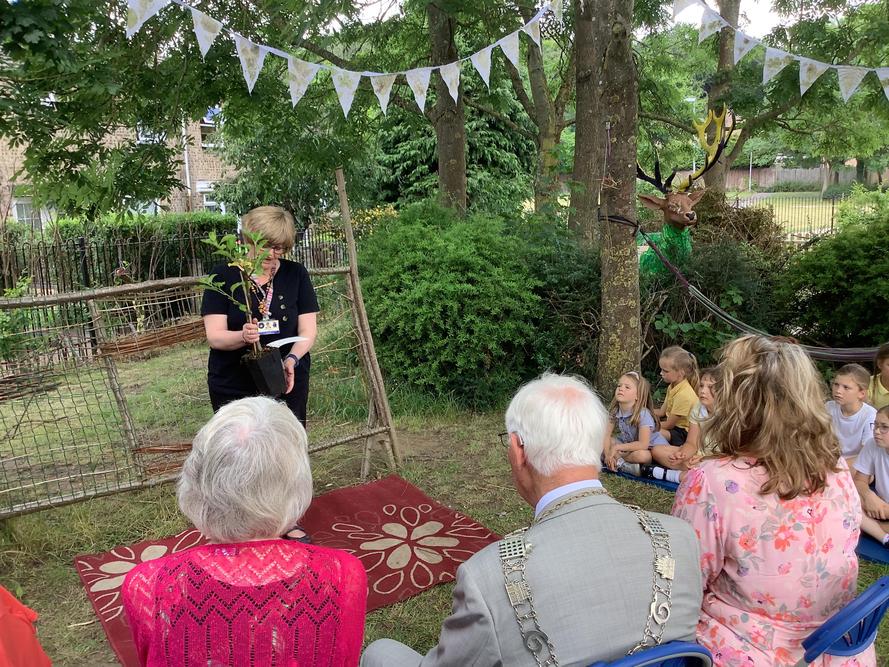 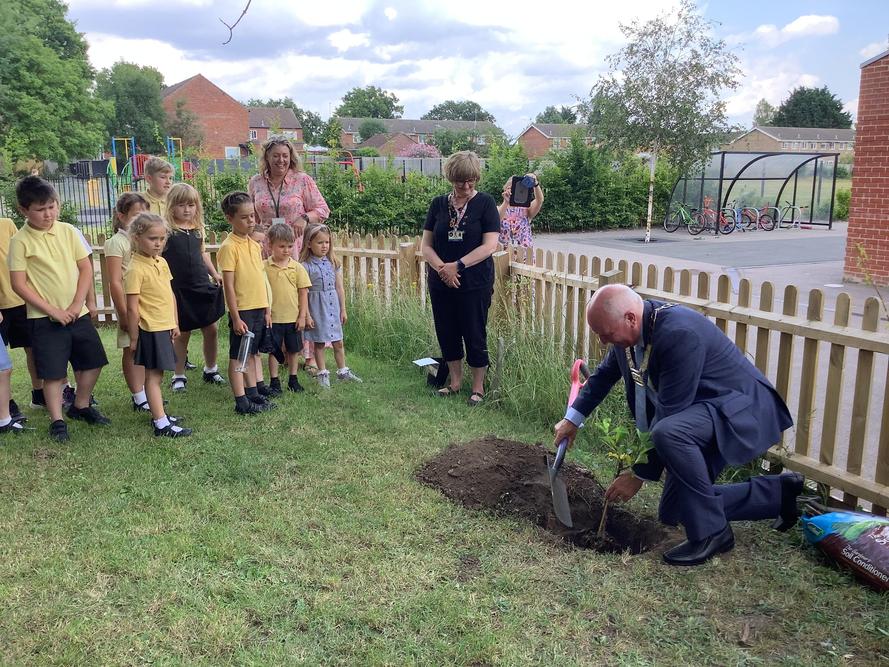 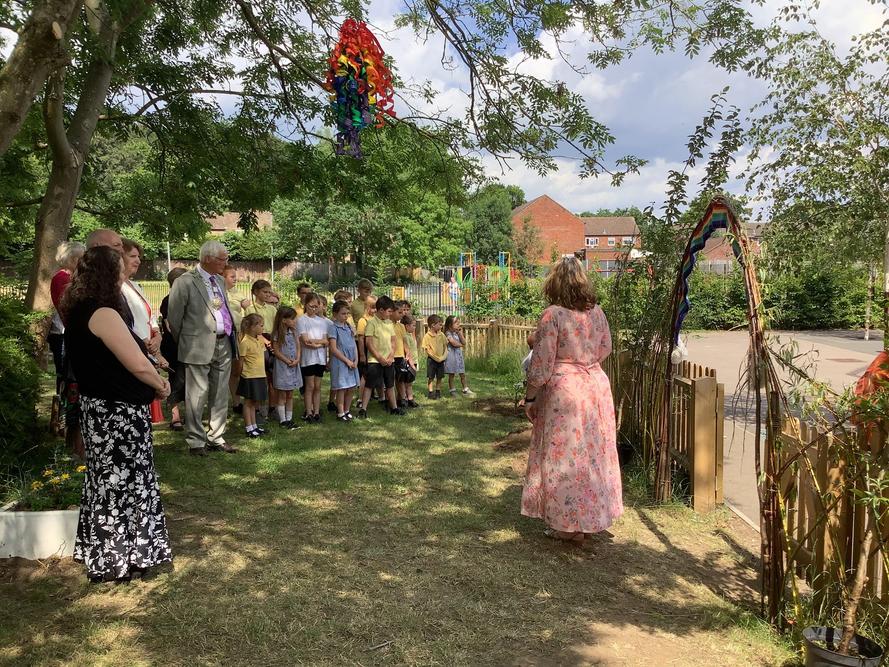 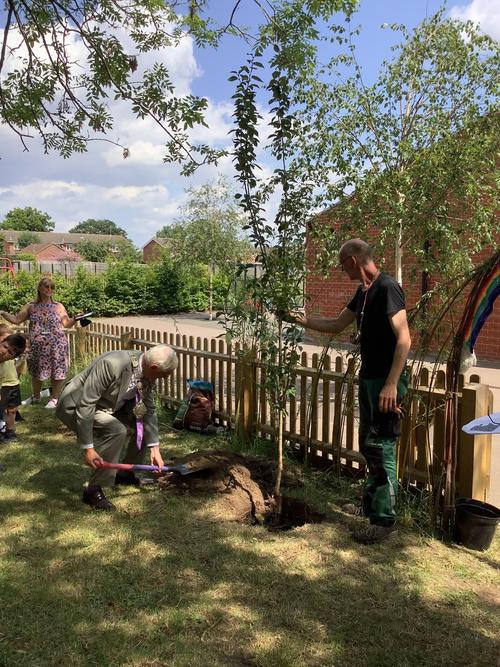 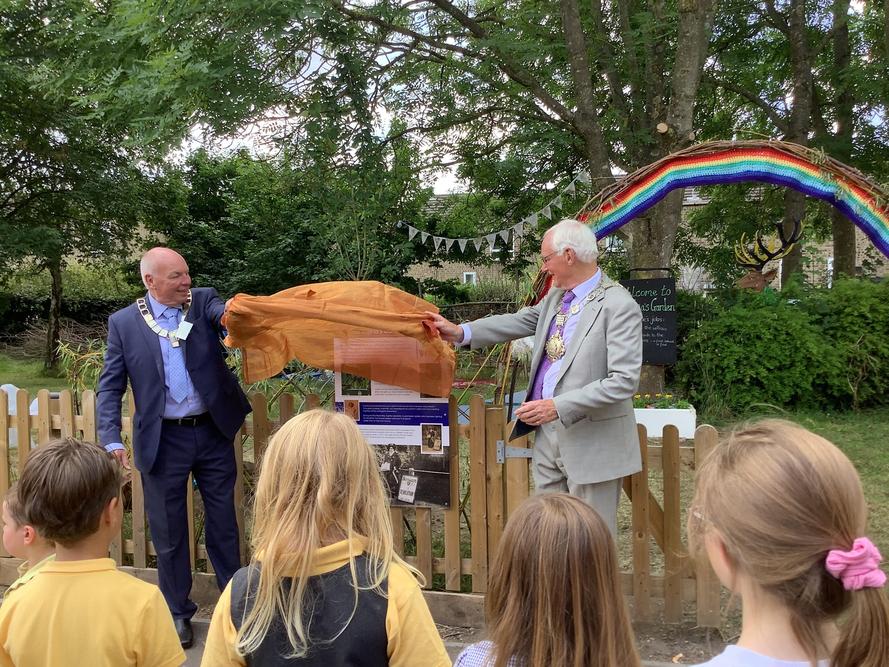 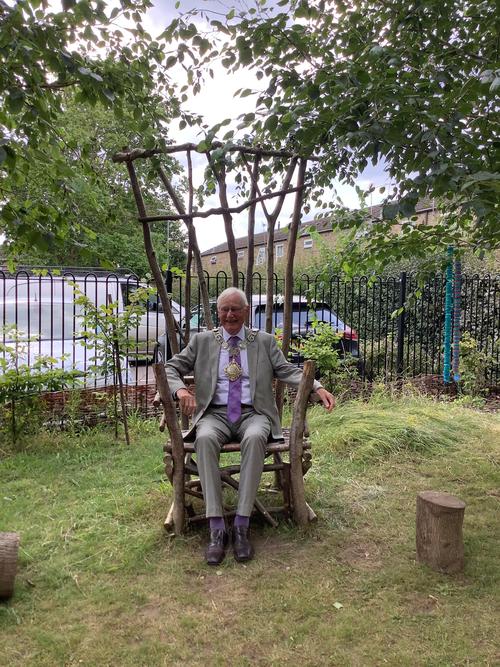 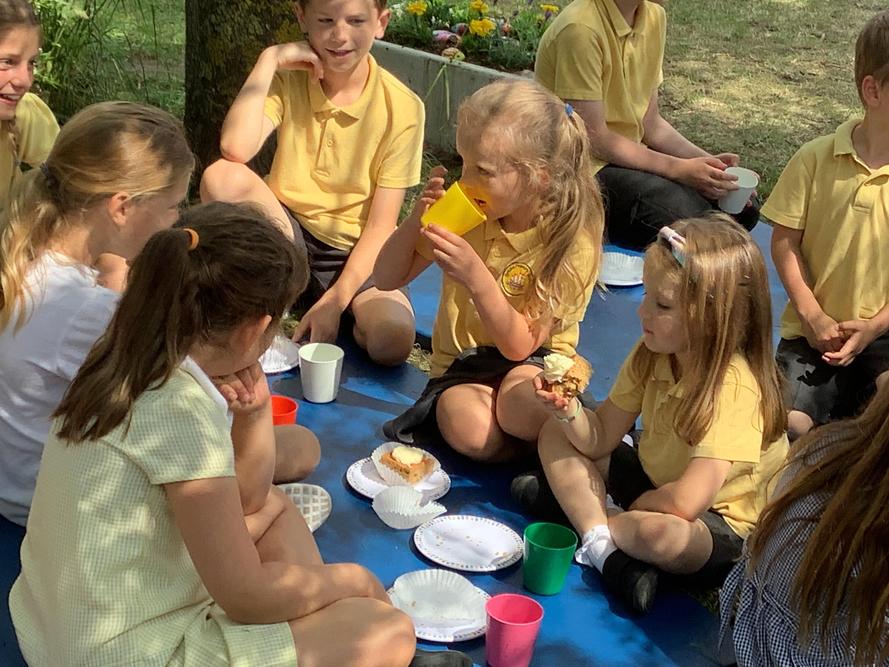 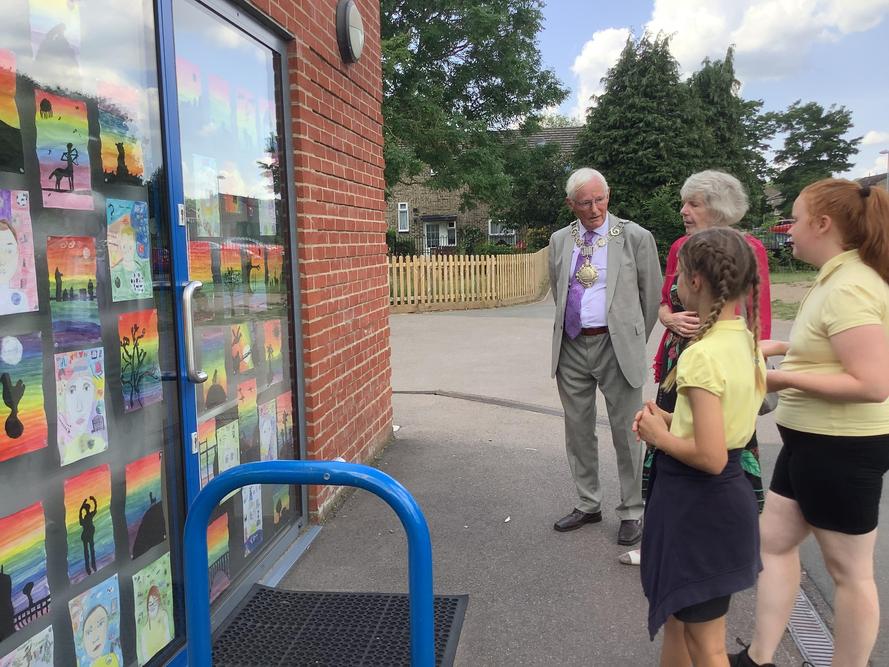 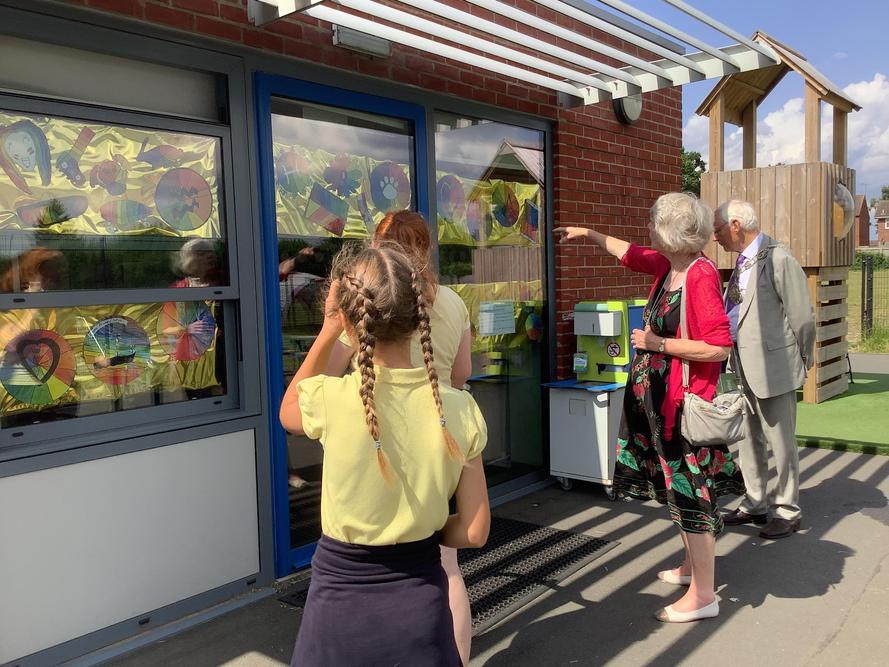 19th July 2021
An exciting event took place at Drake Primary School in Thetford today. It was the official opening of ‘Sophia’s Garden’. The garden is a well-being space recently created on the school grounds. The garden is intended to be a place of reflection and remembrance amidst natural beauty, ecological features and inspiring art works.
The Mayor of Thetford Mike Brindle and Breckland Chairman Roy Brame were amongst the visitors at the official opening, speaking about the value of having a ‘place away’ especially in this time of uncertainty caused by the pandemic. The guests also planted blossom trees which will serve as a perpetual reminder of Drake’s school values such as trust, love and hope.
The official opening of the garden was part of Drake’s annual ‘Diversity through the Arts’ festival. The Mayor and his wife also enjoyed a tour of the festival’s artwork displays, guided by members of the Arts Council. The displays were mounted in the windows all around the school, so that the ‘art trail’ could be safely viewed from the outside of the school.
The pupils of Drake themselves have planned the features of the garden. They have advocated for a strong message of
sustainability and recycling. So everything used is from the school or donated to the school, such as stumps to sit on or old sinks for a pond. A rainbow arch welcomes visitors within. Willow installations, created by staff and children of the school provide a simple aesthetic appeal. The garden even has a cosy den to slip away to when the occasion calls.
The school Eco Council has been working to improve biodiversity in the school, so the garden has wild edges and areas with dead wood to create habitats. There are plants to attract pollinators with plans for more wildflowers next spring. The Eco Council also has helped to create a pond, a feature requested by many of our children, and they have put bird feeders around the garden.
The school Arts Council wanted the garden to include sculptures and art including some the reuse of unwanted plastic. So for instance, visitors will see a rainbow of bottle bottom flowers and a flock of doves created by the school community during the lockdown.
The garden is named for the inspirational figure Princess Sophia Duleep Singh, a person whose life was dedicated to seeking equality and caring for others. Sophia is best known as a suffragette and campaigner for women's rights. Daughter of Maharaja Duleep Singh and goddaughter of Queen Victoria, she used her position and her tenacity in the fight for gender equality in the early 20th century. Sophia has many local connections as her family once lived on the Elveden estate. They also donated the Ancient House to the town to become the Thetford Museum. The Ancient House Museum have supported the school in the exploration of Princess Sophia’s life and legacy. They kindly provided large display boards chronicling her many achievements.
The plans for the garden have only just begun- there is a list of future additions the pupils hope to install, such as a willow tunnel and a sensory trail. Sophia’s Garden will be a source of joy and inspiration to the Drake School community for years to come.