Watch a full orchestral performance of 'Mars' from Holst's 'The Planets' by the BBC National Orchestra of Wales, conducted by Thomas Søndergård.
Listen out for:
- a relentless, driving 5 beat ostinato
- strings playing with the wood of the bow
- brass instruments and trumpet fanfares
- loud dynamics and crescendos
- pulsing drum beats

Key facts:
* Holst was a British composer. He was born in the Victorian times and lived during WW1.
* Holst was a music teacher in schools.
* Gustav Holst’s most significant piece is The Planet Suite written at the start of World War 1.

Find out more in our Assembly video: 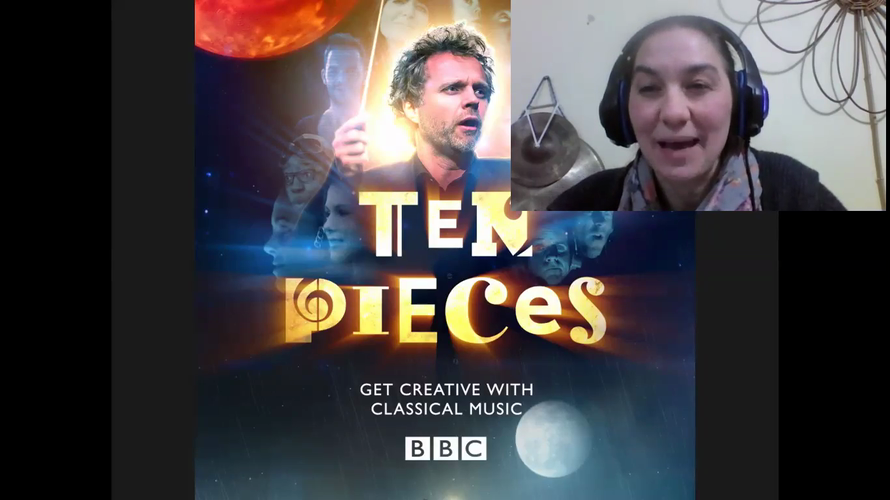 Gustav Holst was a British composer living and working in London 100 years ago. He was a very interesting man. He was fascinated by space, astrology, religion, meditation and vegetarianism - in many ways he was completely ahead of his time. Music ran in Holst's family and so it wasn't a surprise to his parents when he decided to learn the piano. Sadly, an injury to his arm meant that he had to give up and so he took up composing and, because it made more money, he played trombone in theatre bands.
Holst attended the Royal College of Music in London, where he studied composition. After studying, Holst made a living playing the trombone in orchestras before becoming a teacher of music.
Holst wanted to join the army when WW1 started but he was rejected for military service because he had bad eyesight. Instead, Holst had the opportunity to serve his country by teaching music to the British troops
His biggest success came with his Planets Suite - a set of pieces for orchestra that describes the character of each planet. Holst didn't like the fame that this piece brought him. He wouldn't sign autographs, do interviews or accept awards and as the years went by he spent more and more time teaching. He inspired many young composers.

Mars from The Planets Suite
Watch Dick and Dom introduce 'Mars' from Holst's 'The Planets':

Gustav Holst’s most significant orchestral piece is The Planet Suite written between the years 1914-16. There are seven movements in The Planets, and each of these musically depicts a planet.

Mars is the first movement of the Planets suite, and it is known for its power and strength. An author can create a dark mood in a story with words. A composer can create a dark mood with their use of instruments. Holst used thumping drums and the sound of the strings to suggest anger and aggression. The heavy use of brass and percussion instruments, commonly associated with the military, suggests an army marching to war.
Most military marches have four beats repeating. This piece has 5 beats which is unusual. It makes the piece feel uncomfortable and tense.
Place in History:
Holst was composing music in the early part of the 20th century. We call this period of music, the Early 20th Century Period or Modern Period. Music from the 20th century, is extremely varied. Many modern composers explored untraditional sounds and based their music on rhythm, texture and tone colour, instead of the more traditional aspects of melody.
Find Holst’s place on our Charanga Music History timeline:


Mars by Isao Tomita
Isao Tomita was a Japanese composer, regarded as one of the pioneers of electronic music and space music, and as one of the most famous producers of analog synthesizer arrangements. Listen to her interpretation of Mars:
https://www.youtube.com/watch?v=0cmzmp9nhrk

Treasure
You might like to listen to this Cbeebies Ten Pieces Story called ‘Treasure’ based on children’s ideas about Mars.
https://www.bbc.co.uk/cbeebies/radio/ten-pieces-treasure?collection=radio-ten-pieces-story-time

Earth
Holst didn’t write a piece of music for Earth, but another composer called Hans Zimmer has.
Watch Chris and Cat as they find out about and get ready to perform in the world premiere of Hans Zimmer’s “Earth” at the CBeebies Prom.
https://www.youtube.com/watch?v=ibBXTgwx7U8

The Planets 2018
When Holst wrote his Planets suite a century ago, little was known about the components of the solar system: each of his planetary portraits was inspired more by astrology than by astronomy.
Where Holst painted Mars as the “bringer of war” and Venus as the “bringer of peace”, scientists now know Mars to be a rather serene planet, while Venus has one of the solar system’s most turbulent climates.
The Planets 2018 project teamed composers with Scientists to use what we have learned about the planets in the last 100 years to write a new Planets Suite.
https://soundcloud.com/sounduk/sets/the-planets-2018
Top
Cookie information
Cookie Notice