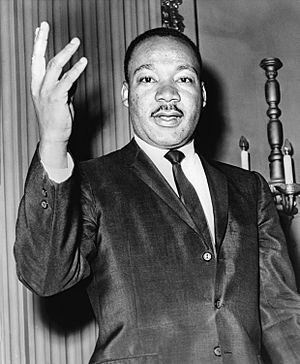 Martin Luther King, Jr. (January 15, 1929 – April 4, 1968) was an American pastor, activist, humanitarian, and leader in the African-American Civil Rights Movement. He is best known for improving civil rights by using nonviolent civil disobedience, based on his Christian beliefs. Because he was both a Ph.D. and a pastor, King is sometimes called The Reverend Doctor Martin Luther King Jr. (abbreviated the Rev. Dr. King), or just Dr. King. He is also known by his initials, MLK.

King worked hard to make people understand that not only blacks but that all races should always be treated equally to white people. He gave speeches to encourage African Americans to protest without using violence.

Led by Dr. King and others, many African Americans used nonviolent, peaceful strategies to fight for their civil rights. These strategies included sit-ins, boycotts, and protest marches. Often they were attacked by white police officers or people who did not want African Americans to have more rights. However, no matter how badly they were attacked, Dr. King and his followers never fought back.

King also helped to organize the 1963 March on Washington, where he delivered his "I Have a Dream" speech. The next year, he won the Nobel Peace Prize.

King fought for equal rights from the start of the Montgomery Bus Boycott in 1955 until he was murdered by James Earl Ray in April 1968.